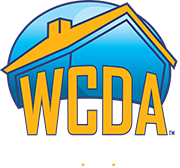 Wilson received the award on Thursday May 10, 2018 at the Wyoming Mortgage Lenders Association (WMLA) Conference in Casper, Wyoming.

Wilson has over 35 years of experience in the mortgage lending community. From 1987-2015 she was Vice President, Real Estate Loan Manager at a locally owned community bank in Casper, Wyoming. During her time there, Wilson originated and sold hundreds of loans to WCDA. In 2009, she was named the WCDA Lender of the Year. Carol has always loved working with low to moderate income, first-time homebuyers.

In 2015, she accepted the position of Director of Single Family Programs at WCDA where she oversees the Loan Review process, creates and manages single family products, and manages the Real Estate Owned (REO) department.

Currently Wilson serves on the Education Board of the Wyoming Housing Network and is a board member of the Wyoming Mortgage Lenders Association and Wyoming Realtors.

The Brown-Wells Service Award was established by the WMLA in 2014 to honor an individual within the Wyoming mortgage lending community who exemplifies service above self in commitment to his or her profession, customers, and the community they live in.

The award was named after Mike Brown and Scott Wells who were both Officers/Directors of the WMLA Board.  Brown was one of the founding members of the WMLA which was formed in 1986.  Both individuals held high ethical standards in business and used their professional knowledge to serve the community in many ways. Receipt of this award was especially meaningful to Wilson as she and Mike Brown were coworkers and colleagues for many years.

2018 WCDA Lender of the Year Announced

Knighton received the award on Thursday May 10, 2018 at the Wyoming Mortgage Lenders Association (WMLA) Conference in Casper, Wyoming.

Knighton has worked in the mortgage industry for over nine years and enjoys working with people, helping them get into their dream home, and educating them about credit.

“In my career, my goal is to get to know the needs of the borrowers so they can obtain the right loan while at the same time building a caring client relationship. I strive to keep in constant communication with my clients, realtors, and referral partners and have the passion, commitment, experience, and diligence my clients deserve,” says Knighton.

Knighton is a strong believer in WCDA and its programs. She is known for asking important questions and going out of her way to ensure her borrowers receive the best customer service.

The Lender of the Year award was established by WCDA as a way to recognize the top volume producing lender around the state. The award also celebrates the lender as they promote responsible homeownership for families throughout Wyoming.

WCDA will be closed all day, Monday, May 28th 2018 for Memorial Day. We will reopen with regular business hours on Tuesday, May 29th. Please contact us with any questions you may have. Thank you!

The Wyoming Community Development Authority (WCDA) will conduct a
public hearing Monday, June 4, 2018 at 10:00 a.m. at the offices of WCDA, 155 North Beech Street, Casper, WY. An Open Forum for questions and discussion will be held immediately before the Public Hearing beginning at 9:00 a.m. A conference call number is available for the meeting. Please use 1-877-633-0079 (pin # 2454) to call in. The purpose of this Public Hearing and Open Forum will be to solicit comments with respect to the 2019 Wyoming Allocation Plan for Section 42 Tax Credits. Public input will be heard from interested parties at this time. WCDA will be accepting written comments that must be received by Friday, June 1, 2018 at 5:00 p.m. to be read into the minutes of the hearing.